This cake was for a 13-year-old's birthday party. He is on his school's cross country team and we decided it would be neat to create a cake to mimic the team's logo, which is a sneaker with wings.

The cake design was to be a sneaker with wings sitting atop a sheet cake. To start with, I made a 12x12 cake. I used a modified box mix recipe that included a packet of instant chocolate pudding and an extra egg. The result was more of a pound cake than a spong cake. I like how much easier it is to carve and cover a pound cake. The recipe is on the side of a box of Duncan Hines devil's food cake mix. Or find it on the Duncan Hines website. For a 12x12 cake in a 2" cake pan, just double the recipe, cook at 325 instead of 350. I didn't note the exact baking time, but I would guess that it was 65-75 minutes. As with any cake baking, bake until a toothpick inserted into the center comes out clean.

To get the shape of the shoe, I went online and got a picture of the bottom of a shoe. I printed that picture and cut out a pattern for the sole. I copied that onto a piece of cake cardboard and cut out the shape. I cut the 12x12 cake in half and, after levelling the bottom half, I stacked the two using a simple buttercream for the filling. Then I carved out the general outline and then, using a bread knife, I carved out the rest of the shoe shape by eye. When I was finished, it looked a bit wide. But I decided it would be better that way. It left more cake for the party guests. Maybe this particular runner had wide feet. 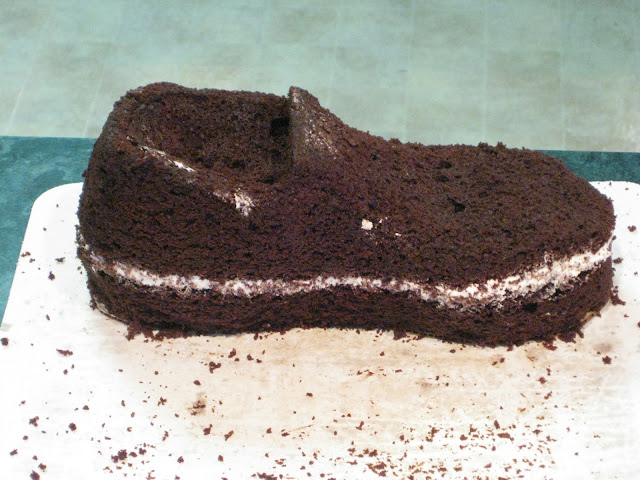 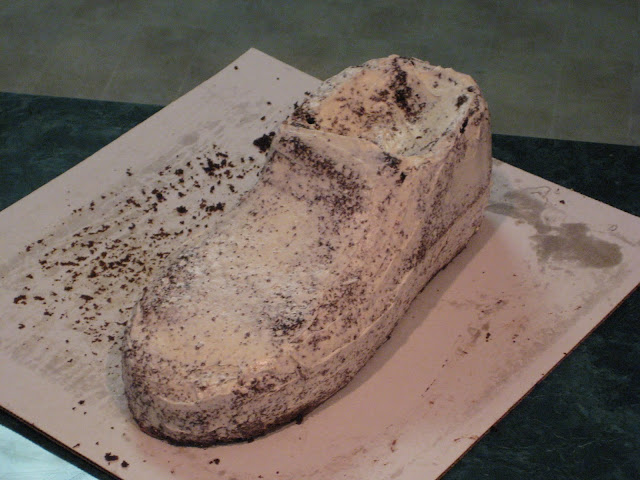 At this point, I let it sit overnight in the refrigerator. On the following morning, I covered it in fondant. I didn't use just one piece. Instead, I used different pieces and assembled them over the cake as if I were sewing pieces of leather on a shoe. I have a tool that has a gear-like shaped wheel that I use to emboss the stitching marks on the fondant. The shoe laces were just strips of fondant. The pieces were all "glued" together with a brush of water acting as glue. Water makes the sugary fondant very sticky. You have to be really careful when brushing water over colored fondant. Too much water and it will drip the color of the fondant and that doesn't look nice. Below are photos of the cake after it was covered and looking like a sneaker. I didn't model any particular brand or style. This gave me some freedom to throw colors and patterns on as I saw fit. 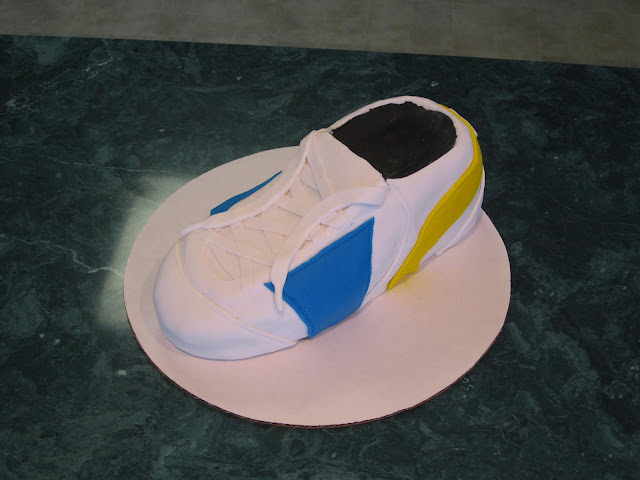 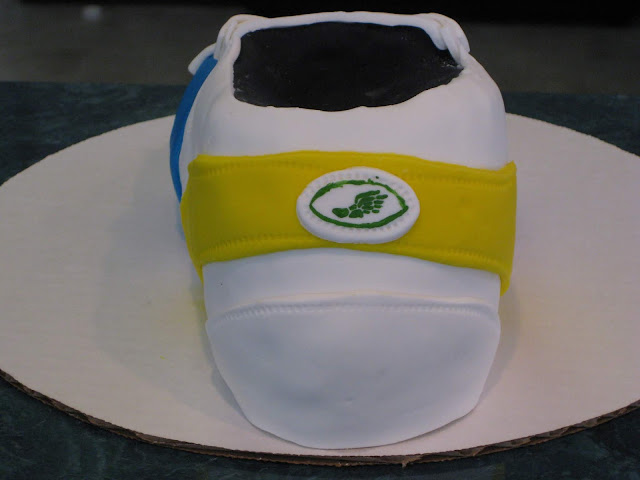 Instead of a shoe company's logo on the side. I went with a single medallion on the back with the team's cross country logo. To make the green paint, I used green food coloring powder with some lemon extract. The lemon extract I used was 83% alcohol. The alcohol evaporates quickly leaving just the color behind. I had to use a really tiny brush for this one. The end result, though not professional artistry, came out nicely. If you are on the school's cross country team, you recognize it without effort.

For the base cake, I just made a 12x18 sheet cake and covered it with some Italian Meringue buttercream, piped some borders and wrote "Happy Birthday" on it. The real trouble came in doing the flames. I chose green because that is the school team's color. I could certainly use more practice piping flames. Sometimes I think the end result looked more like the shoe had stomped a slimy green bug. But if you know the team's logo, you get the idea behind the design. And that was good enough for the cake's intended audience. I put some wooden dowels into the sheet cake to hold up the shoe cake.

For the shoe's wings, I used biscuit sticks. I never heard of these until a few weeks ago. I found them by accident when I was looking for bamboo skewers at the Wegman's grocery store. They are like pretzel sticks, but not exactly. They are brittle, so care should be taken when using them. Check out this Wikipedia article on them. I took some white gum paste and rolled it very thin. I put the sticks in the middle and then folded the gum paste over the stick. Then I used a small rolling pin and rolled the gum paste very thin again. After that, I just cut out a wing shape. I did the same thing again for the second wing and then just let them dry for a week. I just stuck them into the cake at the right spot. Here is a picture of the final cake: 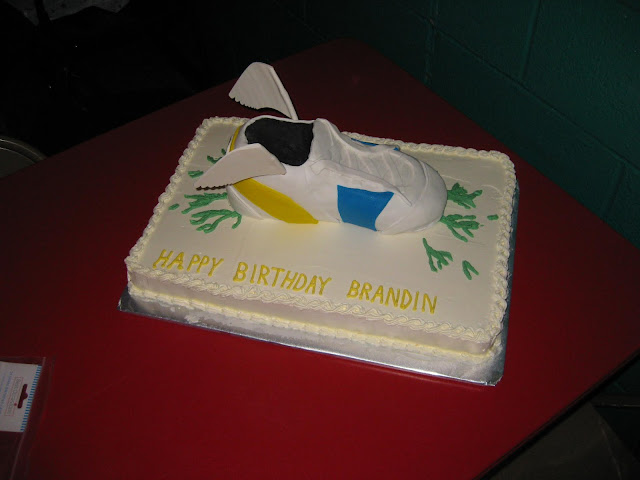 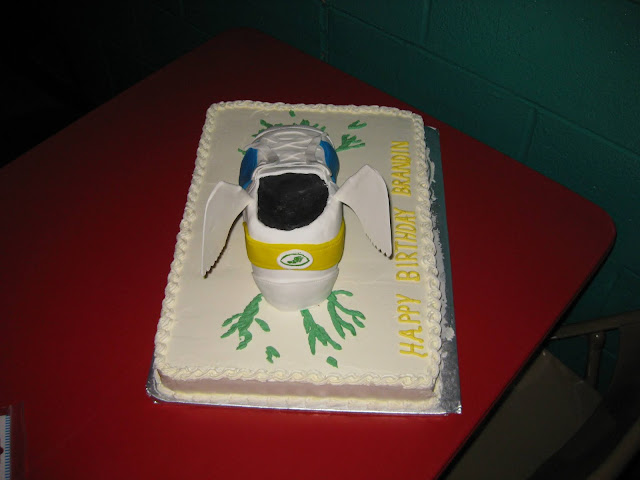 Pay no attention to the sloppiness around the border of the cake on the cake board. I didn't.
Posted by Unknown at 1:30 PM