For my New Year's Eve party, I came up with an idea for a cake depicting snowmen celebrating the new year. It's a simple cake with the most complex part being a sled that a kid snowman (a snowkid?) was riding.

I put a tree in the background and the tree, along with the sled, was made days earlier. To make the tree, I took a flower petal piping tip and piped spirals of differing widths and stacked them. Here is what the tree spirals looked like before stacking: 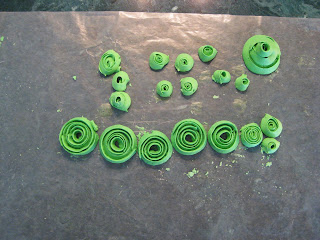 To make the sled, I rolled out some gum paste and free-hand cut out the pieces to make the boards, the runners, and some cross pieces. Days later, when they were nice and dry, I painted them using powdered food color and lemon extract. The lemon extract has a high alcohol content. The alcohol evaporates away leaving only the color behind. Sorry, but I forgot to take pictures of the parts before assembly. I used small dabs of royal icing to act as the glue to put the pieces together.

To make the snowmen, I made cake balls and dipped them in white Wilton candy melts. I made the cake balls by taking the cake scraps from when I levelled the sheet cake and mixed them in the Kitchen Aid mixer with the paddle attachment. I mixed in a small amount of buttercream and when it was done, I ended up with something the consistenacy of cookie dough. Since the cake was already very moist, I did not have to add much buttercream. After refrigerating overnight, I dipped them in Wilton candy melts that I thinned out with some solid Crisco vegetable shortening. I stacked the cake balls, stuck preztel sticks in them for arms, and piped the faces and some buttons. I gave them party hats by taking blue royal icing and piping the hats using a rose petal tip. Silver dragees topped off the hats.

After that, it was just a matter of arranging them on the cake. 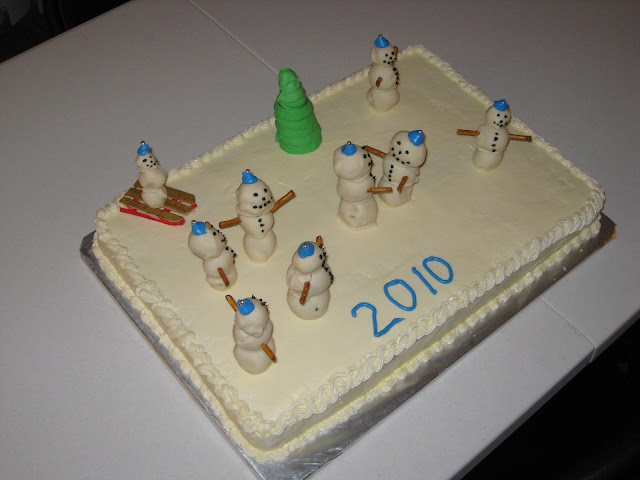 When I build the snowkid for the sled, the pretzel arms felt disproportionally big. So I decided he wouldn't have arms. The story is that he lost them from hitting trees on the way down. Hey, not all snowmen have arms! 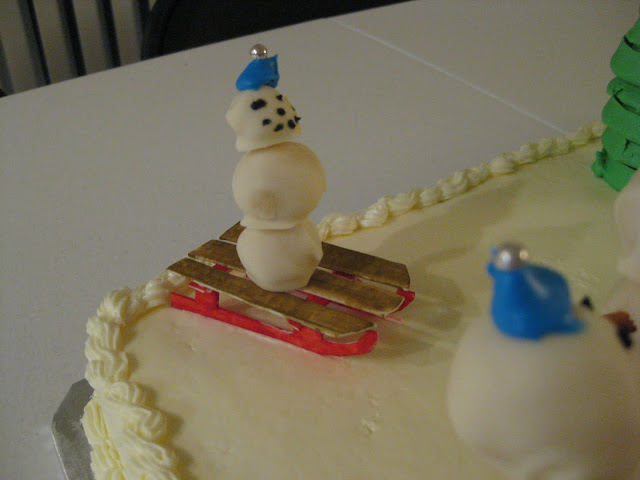