A few weeks ago, I decided to try some fancy cake decorating like they do on Ace of Cakes. Keep in mind that I've never done such a thing. Previously, my cake decorating experience involved slathering some icing over a square or round cake. Sometimes I would write "Happy Birthday" or some such nonsense on the cake. But this is a whole new adventure. I had planned on carving a cake, covering it with fondant, and decorating it up so that it looked like Speed Racer's car, the Mach 5. On Friday, July 11, was a birthday party for a boy at my church who was turning 9 and he was a fan of Speed Racer. So this was the perfect opportunity to try it out. I spoke with his mom about it the Sunday before and she assured me that there would be a back-up cake just in case.

On the Tuesday before the party, I started with just a plain Pillsbury white cake mix and baked it in a 13 x 9 pan. After depanning it, I covered it with some plastic wrap and put it in the fridge over night. The next evening, it was time to carve. I have a toy Mach 5 car that I used as my model. The first thing I did was place it on a piece of parchment paper and trace the outline of the car. Then I cut the parchment out by the outline and put the cut parchment on the cake. Using that, I cut the outline of the cake. I had to use a couple of different knives to shape the rest of it. Here is what it looked like all sculpted with a crumb coating of butter cream icing. It looks like a poorly buttered piece of bread. Above it is the car I used as a model to sculpt the cake. 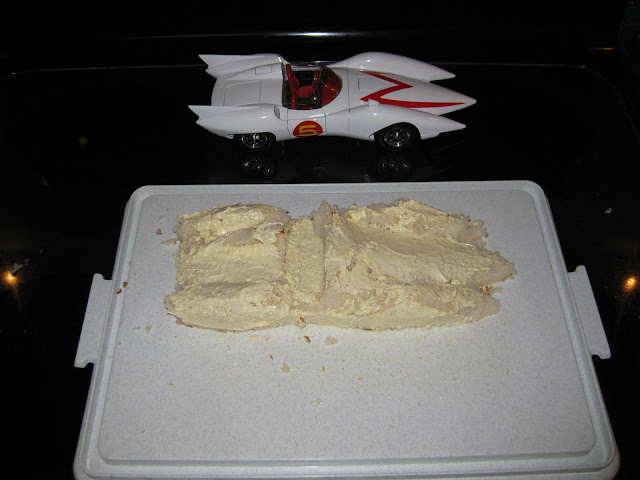 The following evening, Thursday, I covered the thing up in fondant. Fondant is like a rollable icing. Think icing dough. What you end up with is a very smooth surface that you can decorate on top of. I rolled it out like pie dough only I used powdered sugar instead of flour to keep it from sticking to everything. I'd never used fondant before this and I'm glad the instructions in the box said to use the powdered sugar. That stuff can get sticky. Once I had it thin enough and rolled out big enough, I laid it on top of the carved cake and then gently pushed it into all the crevices in the cake until it ended up as seen below: 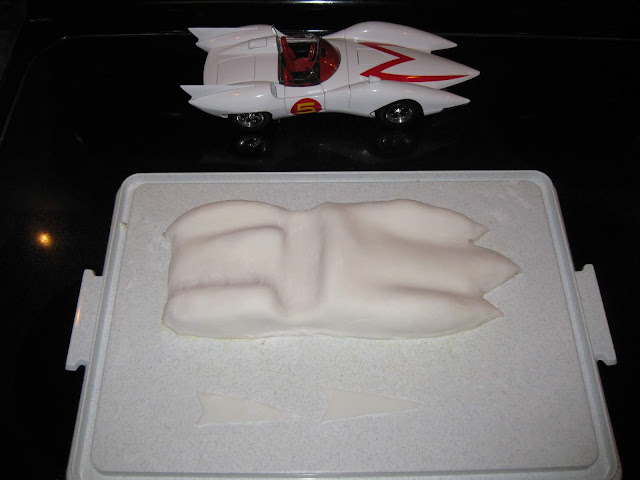 Now, finally, the fun part: actually decorating the cake. I took a half-day vacation that Friday to do the final decorating. The birthday party was that night at 7:00 and it had to be ready. Funny thing: I had a conference call at 1:00 to attend. So I was at home kneeding and rolling out black fondant while discussing database layout and file export options.

I got this piece of clear plastic film to use as the windshield. It's thick enough to stand up on its own but still bendable. I got it from a cake decorating shop in York. I explained what I wanted to do and they came up with this idea. Aside from the windshield and the wheels. Everything else is piped icing. The wheels were made with black fondant. It turns out you can buy some precolored fondant, so I didn't have to bother with black food coloring. Here's what it looked like when I was done with it: 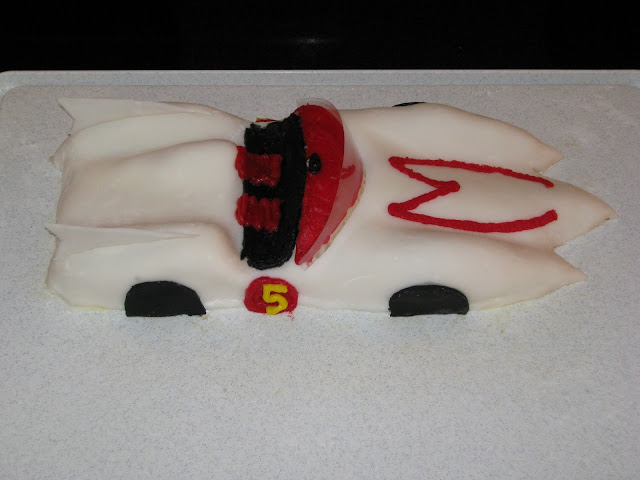 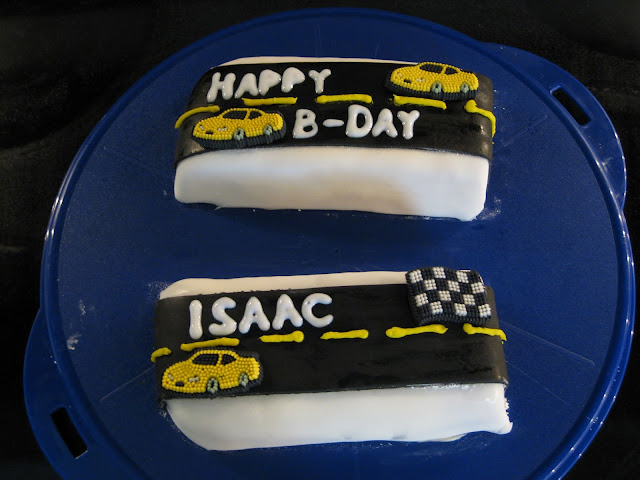 The cake ended up being a big success at the birthday party. I had some fun with the presentation, too. When I carved out the car, there was about a third of the cake that would have gone to waste. I cut the biggest section into two "bricks" with racing themed icing. I had all that left-over black fondant anyway. These became the decoy cakes. The birthday boy, having no clue about the Mach 5 cake hidden away, thought that these were his cakes. We put candles in one of them and everything. Then after blowing out the candles, we brought out the Mach 5 cake as a surprise. It was great. The adults were all aware of it, but the kids had no idea. 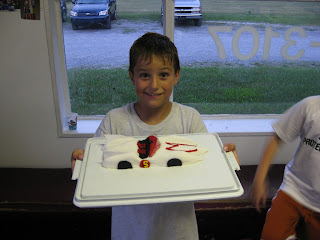 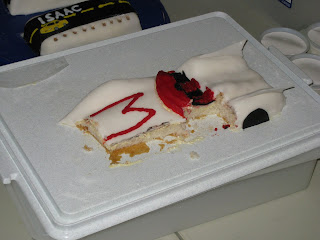 We had a difficult time getting somebody to actually cut into the cake. I certainly wasn't going to do it. I had done enough cake carving anyway. The kid's parents wouldn't do it because they said it was too nice. But it was a cake! Cakes are meant to be eaten. If I didn't want it eaten, I would have saved myself the trouble and got him a plastic toy. So I got kid's aunt to cut into it. It tasted pretty good. That reminds me: too much fondant can give you a tummy ache. I tried some of the left-over fondant back when I was covering it on Thursday.
Posted by Unknown at 6:05 AM