Banners on a cloudy sky

De asked me to make a cake for her son Jacob's wedding shower/reception. Jacob's wedding was in Fulton, MO and many friends and family members would not be able to make the journey to attend the wedding.
To understand the concept behind this cake, you need to understand how Jacob proposed. He hired a pilot to fly an airplane carrying a banner that said, "Gwendolyn, I love you. Will you marry me?" De's first idea was to make a plane out of cake and it could have a banner behind it.

After thinking about it for a few weeks, I came up with a different idea. I would make a simple round, tiered cake. Make it sky blue and covered with clouds. Then I would make a small gum paste airplane carrying a banner around the cake. This would be the bottom two tiers. For the top tier, I wanted a picture of the couple and I would use black fondant as sort of a "frame" for the picture. I thought about painting it, but I never was any good at painting. I called Giant, the local grocery store whose bakery happens to do photo cakes. They will copy a photo onto edible paper with edible ink and let you take it home to put on your own cake. At only $8.00, it's a pretty good deal.

I started out with my usual Duncan Hines cake mix. The bottom tier was white cake. At 16 inches, each layer took three cake mixes. The middle tier was dark chocolate fudge. At 12 inches, each layer took two cake mixes. The bottom and middle tiers were each three layers high, although as I leveled the layers, I took more off of the middle layer so it wasn't as high. The top tier was red velvet. It was 8 inches and only one layer. So it only took one cake mix. In all, I used 16 cake mixes. That took 4 dozen eggs and about 4 1/2 cups of vegetable oil. Here is a picture of the bottom tier staked before I finished crumb coating. 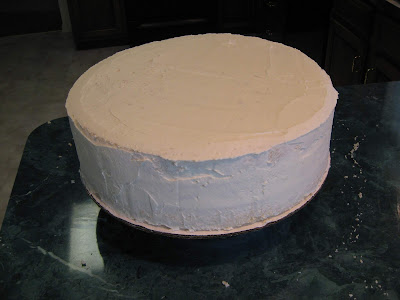 For the blue sky, I used a 5 lb bucket of blue Satin Ice fondant and a 2 lb bucket of white Satin Ice fondant. I mixed them together to get the light blue color. When I put the fondant on the bottom tier, there were many imperfections. This included tears and holes in the fondant. That's okay because I could cover them with clouds. The middle tier covered better. Here's a picture of that. 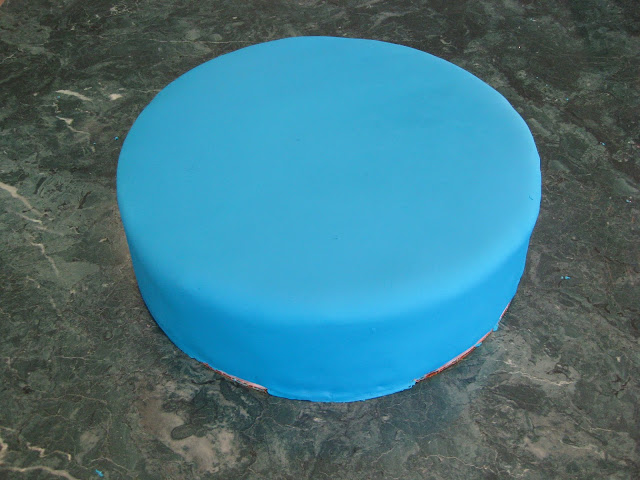 To make the clouds, I just mixed up some royal icing. I made it really thick and added some white food coloring to make them extra white. I just gobbed it on and spread it out with a paint brush to make them look like fluffy clouds. I did this after stacking the bottom two tiers together. Here is a picture. 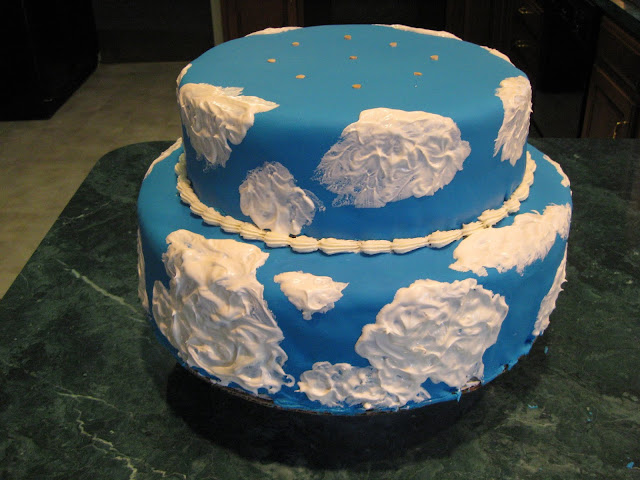 For the banner, I used some white fondant and cut it into a 3 foot strip and glued it to the sky using plain water. I wrote the letters with red royal icing. It's the same icing as I used for the clouds, only I put some red in it.

To make the airplane, I went to Cessna's website and found some scale drawings of one of their planes and used that to model the gum paste. The gum paste plane is actually to scale. Provided, that is, that you ignore the modeling mistakes. By propping the plane on the cake at a angle, it hid many of the modeling imperfections.

For the top tier, I just rolled out a strip of black fondant and wrapped the layer with it. Then I filled in the top with more butter cream and applied the photo to it. You have to apply the photo to fresh, wet butter cream or it won't adhere. Then I piped black icing along the border to hide the seam. I just bought some pre-colored icing for that because black is difficult to color.
Here is a picture of the finished cake along with a nice close-up of the plane. 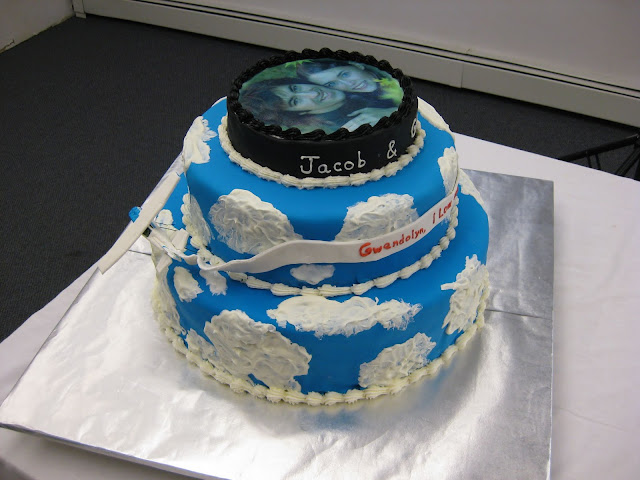 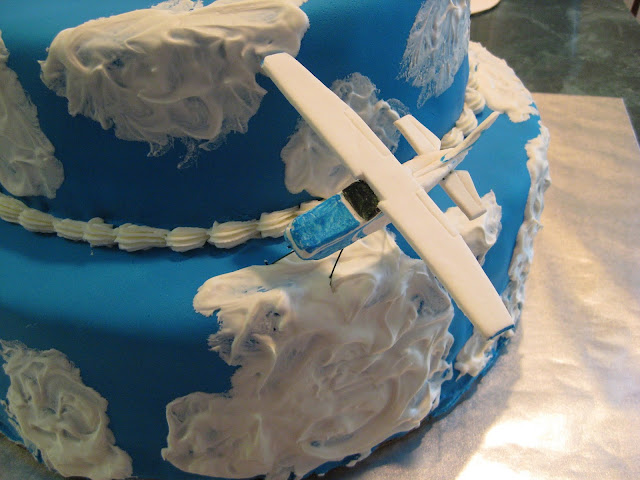